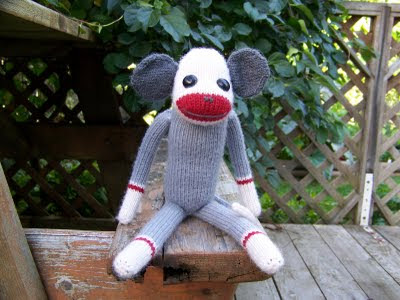 Here's the pattern for the sock monkey. I hope I didn't miss anything. The monkey is knitted in the round with no seaming involved.

Legs:
Using Emily Ocker cast on method and white, cast on 8 sts & divide over 4 needles.
Knit 1 round.
Knit 1, M1 to end = 16 stitches.
Knit 16 rounds.
Join red yarn and knit 2 rounds. Break off and knit another 3 rounds in white. Break off white and join grey.
Knit 52 rows in grey (or until leg is long enough).
Put the live stitches on a holder and make second leg.

Head:
Break off grey and join white. Knit 1 round. For front head shaping, short row 2 sets of white, join red and short row until 8 sts remaining. Return to full sts following the same colour changes.
Knit 3 rows plain knit in white.
Dec for top head shaping. Dec 1 on each side of front & back (total 4 sts dec) every second round until 12 sts remain. Don’t close up the head yet. Put the remaining stitches on some spare yarn to hold. This would make stuffing the monkey easier.

Finishing:
Stuff body, working from feet up. Stuff in small amounts at a time and don’t roll up the stuffing. Keep it nice and loose. It will pack better than large wads. I used wool fleece to stuff mine but if you’re making it for a child, you can buy hypoallergenic stuffing.
When you finished stuffing the head, graft the top close. Pull the yarn tail into the monkey and bury the end.
Optional - You can make a little cloth bag of lavender to stuff in the body but if the monkey will be a toy for a child, I would not recommend this as the monkey may need to be washed occasionally. Also optional is that you can make a little bag of stuffing beads to give the monkey a bit of weight.

Tail:
It’s a 5 stitch icord.
Using white, cast on 5 stitches on one double pointed needle. Slide stitches to other end of the needle and knit. Repeat for 14 rounds. After a few rounds, pull the yarn tail to tighten up the stitches.
Join red and knit 2 rounds, break off red and switch back to white for 2 more rounds. Break off and join grey for another 50 round or until tail is long enough.
Cast off and sew firmly to monkey butt.

Edited to add:  some people mentioned the ears are a bit big - yeah, I know...that was the way my son wanted it to be.  I had done several versions of the ears and these were the ones.  If you want to make the ears smaller,
Using grey, cast on 10 stitches,
Rnd 1 and all odd rounds - Knit.
Rnd 2 - work your increases to 16.
*Then work your subsequent increases to 24 stitches total.
Rounds 9-12 - Knit.
Dec 1 at each end of the ear for front and back of ear. You are decreasing a total of 4 stitches each round until 12 stitches remaining. Graft to close and make second ear.

Face:
Use pins to mark eye placement.
Pin ears to the sides of the head & sew.
Use small black buttons for eyes and pin to the head. If this is a toy for a child, embroider the eyes on with black wool.
If using button, use a strong buttonhole thread and long doll needle, enter the body through the back of the neck and pull through to the first eye placement. Attach first eye and put needle back in the head and out through the next eye placement. Attach the second eye and put needle back in the head and out through the first eye. Pull a bit to indent the eyes but not too tight. When you’re happy with the look, put the needle through the first button, back in the head to the second button. Put the needle through the second button & back in head, exiting at the base of the back of the head. Knot firmly but be careful not to catch any of the wool fibres. Pull the needle through the doll to bury the thread end.
Using black wool, embroider the nose and mouth.
Using some white wool on a needle, run the wool around the neck line a few times. Pull carefully to give the neck a bit of shaping. Tie off and bury the ends in the doll. 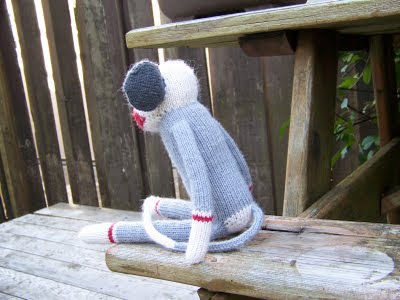